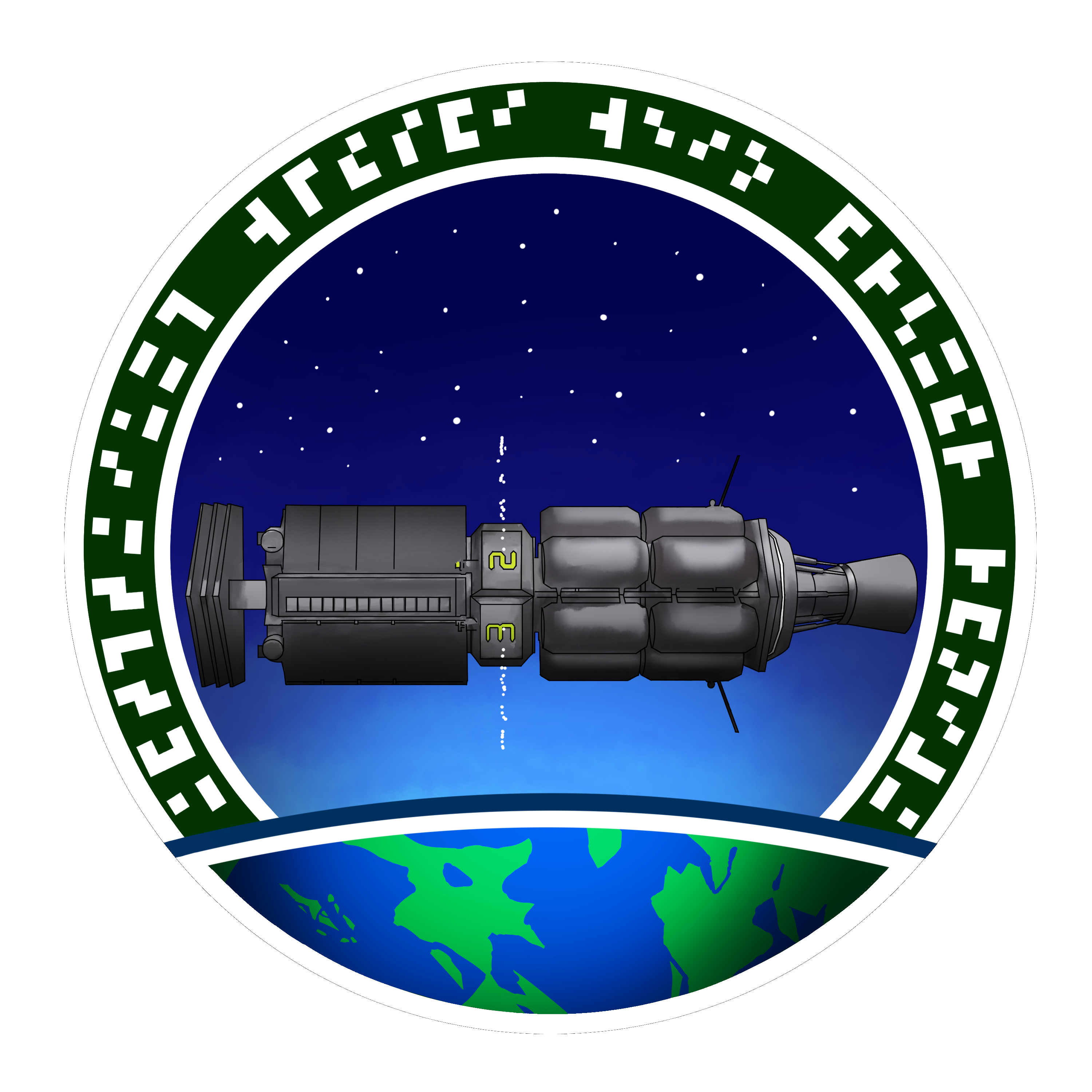 "Massive training is required to instill the courage to break with tradition. Every activity and every job is a part of the process." - W Edwards Deming

If you're interested in joining the plot, join our discord and a GM will help you

If you're interested in joining, also see the edward deming: new player guide.​ 
The Edward Deming started its life as a geological survey ship involved in early human colonial efforts, providing detailed surveys of planets throughout known space. Over the course of hundreds of years the ship has been rebuilt again and again until finally falling into the hands of the Magnetic Assembly and Colony of New Cambridge in the Hawking system. While the Assembly exceled at producing unmanned drones, it did not specialize in creating the creature-comforts needed for long term space travel so it was happy to make use of the ship.

The Exemplar currently in charge of the ship is Heram Wazu, a renaissance man who's defense of native species against the Daqin has set in motion the ongoing conflicts between The American Union and The Magnetic Assembly, pulling the ship into conflict with many of the largest Human powers.

​
​
The ship's primary crew module holds living and work spaces for the day to day needs of the ship's crew. It is largely intended to be a generic crew-module who's design can be copied and used in other craft so it contains a number of configurable spaces.​
​
For internal layout see: Series 1 PCM​
​
​

​
​
The ship's secondary crew module houses mission-specific decks for the crew's use, including the more specialized labs, manufacturing tools, and Echoni living spaces. Much like the Primary crew module, this also contains its own life support systems and avionics.​
​
For internal layout see: Series 1 SCM​

​
The middle-area between the two crew modules contains a lift that provides transport from the crew modules down to the ship's launch bay, and provides access to the containerized component modules along the sides of the ship.​
​
​ 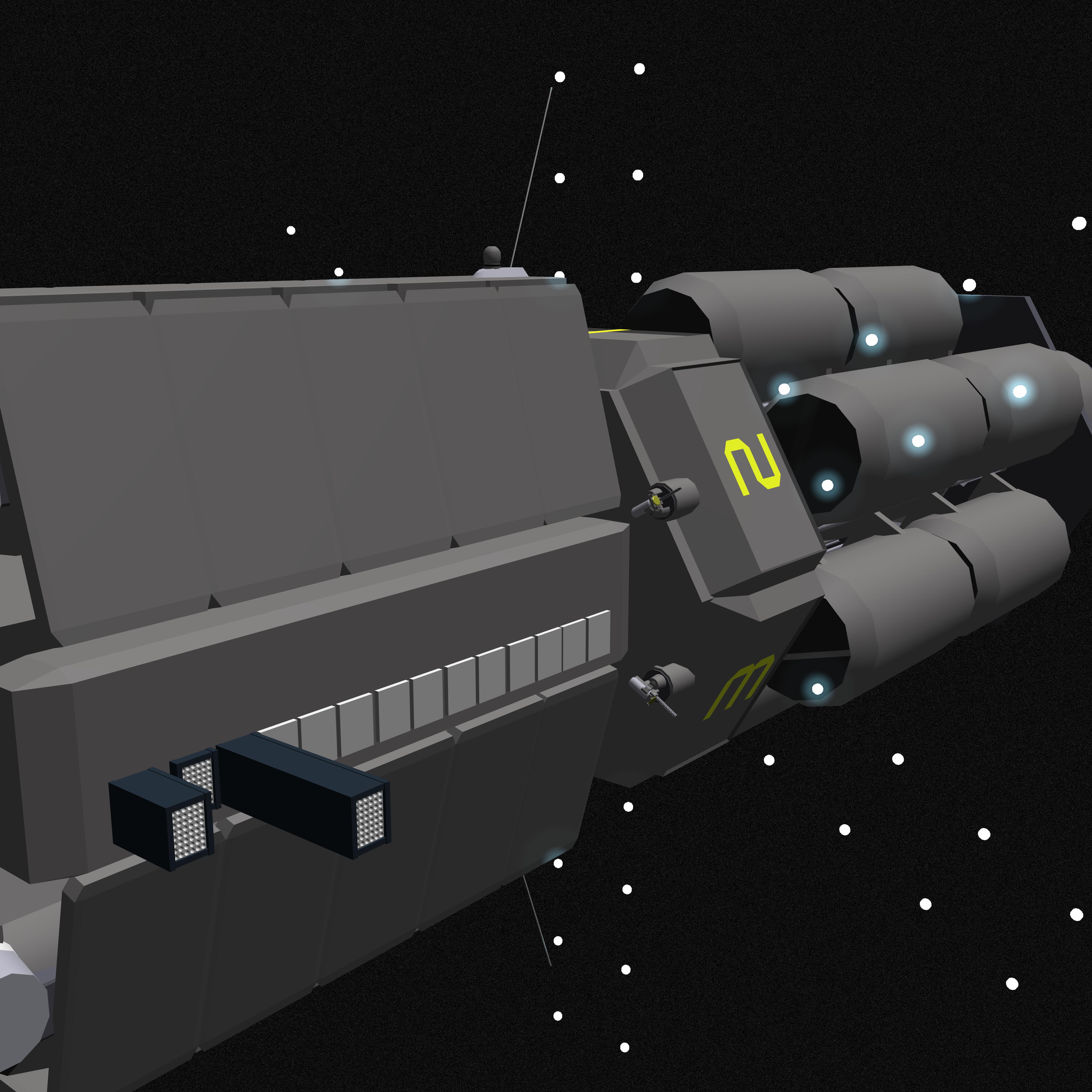 ​
​
The ship houses 6 launch bays, each with their own deployment and navigation lighting that can be projected outward holographically. Each shuttle bay has the dimensions listed below, and is generally large enough to hold a single gleesman class shuttle if loaded diagonally. Two additional cargo container spaces are housed just under each launch bay door, adding an additional 12 spaces for cargo containers.​
​
7.75 Meters Tall​
14.22 Meters Wide​
10.34 Meters Deep​ 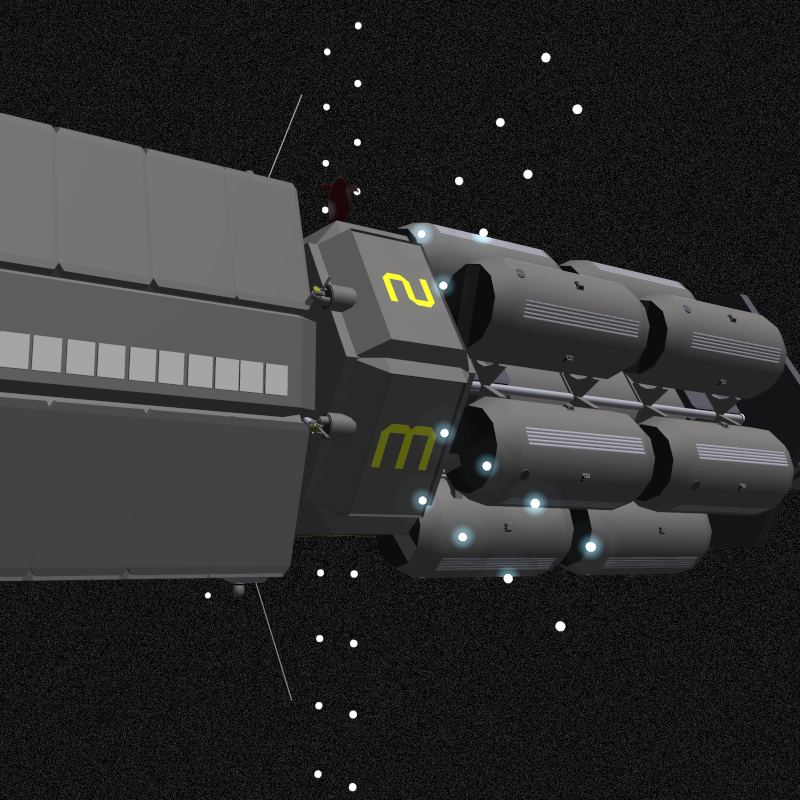 ​
The bulk of the ship in terms of weight is the ship's reaction mass tanks. This is a necessity of travel through space, requiring large amount of stored materials to make increasingly longer trips. The Edward Deming as of 2320 was using very basic storage tanks but after the first expedition to Azathoth the drop tanks were replaced with S6 series remote storage drones.​
​
​ ​
The ED with Re-Mass tanks disconnected​ ​
The ED with S6 series tanks docking with the ship​
​
The Deming has a central internal storage tank, and exterior mounting points for 12 drop-tanks.​
​
Additional equipment was then added to this area including four movable, extendable, support arms for repair work that are positioned between the tanks themselves.​
​
See: S6 Series Storage Tank Drone​

​
Contained in a large Torus at the base of the ship, the Superluminal Engine provides both an aneutronic fusion based power source for the ship as well as a means for providing faster than light travel. This energy can be vented out the rear of the ship for use in a high specific impulse fusion drive.​
​ 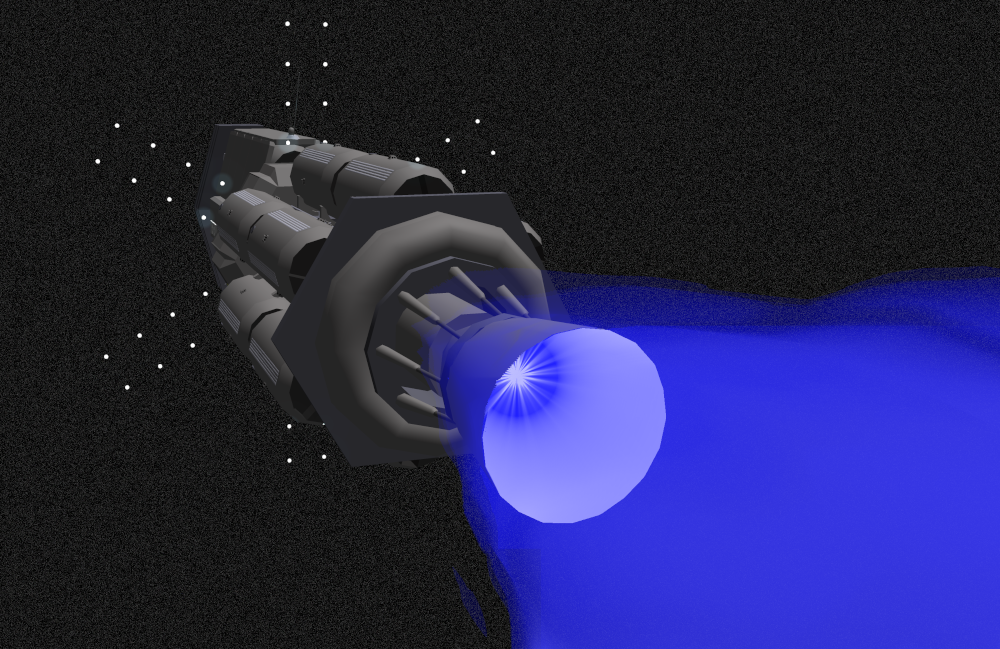 The entire engine assembly is situated behind a composite material radiation shield to help protect the ship while the engine is in use.​


For the long term health of the crew, many long duration starships include some form of artificial gravity. The Edward Deming using three different forms of gravity control for the crew including conventional acceleration based gravity and the more exotic gravity control from the ship’s superluminal device.

​
​
The ship is configured using the traditional stack architecture. When under thrust, the acceleration of the ship creates a uniform feeling of gravity using ‘downward’ in the direction opposite of the ship’s acceleration. This allows the ship to accelerate (and decelerate) towards a destination at a constant 1g efficiently and comfortably for the crew.​
​

​
​
When not accelerating, the ship’s crew compartments can be opened outward and the entire ship spun to simulate gravity. This energy-efficient method allows the crew to enjoy the effects of gravity during long duration stays in orbit near a planet.​
​

​
​
The Edward Deming’s Superluminal Device and the exotic materials contained within allow the ship to produce and control gravity around the ship itself. This can be used to maintain a consistent 1g throughout the crew compartment as well as to mitigate the effects of unintended acceleration on the ship due to enemy action. The anti-gravity effects of the system can also be used to mitigate the greater than 1 G effects from the ship’s engines if they are being used to accelerate the ship above 1G.​
​
The massive power requirements for this system mean that it is often left offline.​
​
​
​

The Edward Deming has space for 14 containerized component modules on either side of the ship and another 12 located just below the launch bay for a total of 40. These modules can house a range of weapon systems but typically are used to house drones, life support, or other crew-focused equipment. Typically the ship's firepower comes in the form of armed S4 series drones that escort the ship.

After the battle of Reiss in mid-2320 the Edward Deming has been armed with four UG-301 point defense systems. This 2.5mm metal ball bearing launching point defense weapon is often referred to as a 'sandblaster' due to the high volume of small projectiles that it shoots. The weapon isn't very effective against heavy armor, but is well suited for destroying small targets near the ship.​
​
See: UG-301​

21 MACS-11 CELSS Life Support Systems provide enough life support for 42 people indefinitely. These use up a large amount of the weight and space the ship has available to carry, but the extreme long duration nature of the missions necessitate stretching supplies as long as possible. This is supplemented by large onboard supply stores, and a kitchen area capable of processing grown food into longer-term storable formats.

Not only can the Deming support a comfortable 1 atmosphere of pressure and 1g of gravity for the crew, but with grey-water recycling and hydroponics it can support its crew basically indefinitely so long as it has fusion fuels for the reactor.

Though the ship can sustain life with lower atmospheric pressure, earth-like conditions are usually kept for crew comfort.

This page has been seen 204 times.