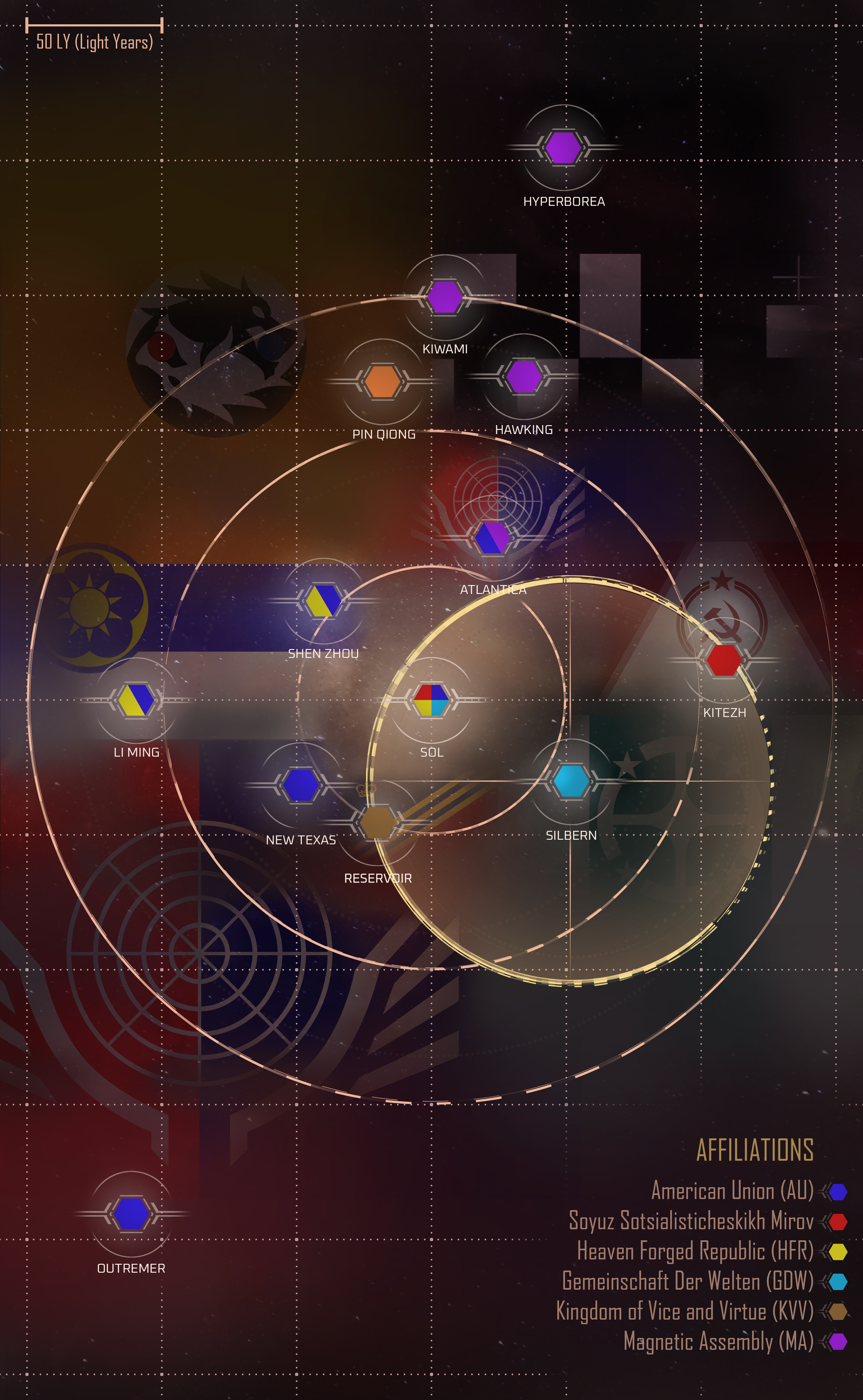 The Silbern System contains a solitary White Dwarf star, which the system is named after. Orbiting it are two debris belts, countless comets, innumerable dwarf planets both named and not, and 3 outer giant planets with impressive ring systems and numerous moons. There are no inner system planets. There is no Oort cloud equivalent.

The aptly named Silbern (German for Silver) is a solitary White Dwarf star located at the center of the system. The star has an estimated 1.2 Solar Masses, and is roughly the size of Earth. It is an Oxygen-Neon-Magnesium type, but heavier elements have been detected likely as the result of comet impacts and the destruction of the inner system planets when Silbern was in its Red Giant phase.

The Stahl Belt is the innermost of two debris belts. It spans from an inner orbital radius of 3.6 AU to an outer radius of 6.1 AU from Silbern. The Stahl Belt is a little over 90 times more dense than the Main Asteroid Belt of the Sol system, with a total mass of just over 5 Earth Masses, and an average distance between objects within the belt at around 6,700 km. Objects within the Stahl Belt tend to be larger and denser than normal, with numerous Dwarf Planets contained within. It is extremely rich in heavier elements.

It is theorized that sometime in the far distant past, a large rogue terrestrial planet entered the Silbern system, and collided with another terrestrial planet of similar size and mass, annihilating both and forming much of the debris field that is now the Stahl Belt.

Orbiting at roughly 9.9 AU from Silbern, Helmholtz is the innermost of the 3 outer planets of the Silbern System, and plays shepherd to the Stahl Belt. It is a reddish purple, stormy Gas Giant roughly half again the diameter of Jupiter, and over twice its mass. It is surrounded by a thick, nebulous ring system that tapers off the further you get from the planet, and is orbited by 14 dwarf planet sized moons and an ever changing number of moonlets believed to presently number more than 80. Adding to this general navigation hazard, Helmholtz shares its orbit with a dense Trojan and a dense Greek asteroid cloud, and has a debris field extending inward from it to the outer border of the Stahl Belt.

The oddly shaped ring system of Helmholtz is believed to be the product of two cosmic events over the lifetime of the Silbern System, not including the formation of the system itself. The first event is the same event responsible for the unusually heavy mass of the Stahl Belt; a planetary collision between two large terrestrial planets, one believed to be a rogue migrant from a nearby supernova, the other the outermost of the inner system planets. The other event was Silbern’s transition from Red Giant to Whte Dwarf then pushing all of that solid debris outward for Helmholtz’s mass shadow to sweep up. It’s just been a long process of ripping apart debris with tidal forces or smashing objects together in orbit ever since; a process that actively continues to this day, which is why the ring system is more of a nebulous mess than something as sharply defined as the Rings of Saturn.

Lenard is the second of the three outer planets of the Silbern System, orbiting Silbern at an average radius of 33.6 AU. It is a solid cored Gas Giant with an extremely windy pinkish red striped atmosphere roughly the size of Jupiter, but over 8 times more massive. Lenard is orbited by 7 dwarf planet sized moons, and possesses a Super-Saturn Ring System that is visible to the naked eye from almost anywhere in the system. It should be noted that Lenard’s orbital velocity keeps it perpetually in orbit around Silbern opposite of Helmholtz, in spite of having an orbital radius more than 3 times greater.

Lenard’s impressive Super-Saturn Ring System is the product of the planet’s far reaching and powerful gravitational influence drawing in much of the stellar material in the outer system during the formation of the Silbern System. It again greedily grabbed hold of a mind bogglingly high quantity of star stuff in the wake of Silbern’s coronal mass ejection, and the ensuing thousands of years of the Planetary Nebula phase of the star system’s existence. The resulting ring system is millions of kilometers across, and thousands of kilometers thick. The only breaks in the ring system are caused by the shepherding orbits of 7 dwarf planet sized moons carving voids into it.

Hess, the final planet in the system, orbits Silbern at an average radius of 57.2 AU, and plays shepherd to the Auerbach Belt from an inner orbit. It is a dense Mega-Earth class Massive Solid Planet with a heft of roughly 20 Earth-Masses, but only 2.5 Earths wide. Hess possesses a dense, soupy atmosphere made mostly of icier elements that is blue in color, but remains liquid in nature due to the immense pressure exerted upon it by the planet’s gravity. It also possesses a fairly impressive looking bluish colored ring system, and is orbited by 9 decently sized moons and several moonlet asteroids, all of which have carved tracks into the relatively thin rings of icy material.

The outermost debris field, known as the Auerbach Belt, orbits Silbern at a range of 78 AU, and extends out as far as 102 AU. Like most outer belts, the Auerbach Belt is composed mostly of lighter element particles and tiny icy asteroids, and plays host to many dwarf planets. This belt is estimated to have more than double the overall mass of the Stahl Belt, but only a small fraction of the density as it is spread across a gigantic volume of space.

Silbern has a far lower than normal level of long period comet activity, largely as a result of the system’s cosmic history. Most comets have left the system forever, with much of the remainder having impacted Silbern. However, the system also suffers from the creation of yet more rogue projectiles by both Helmholtz and Hess with regularity. The three giant planets also serve to capture or destroy many of these objects eventually, but they are responsible for some of the complex orbital trajectories observed as well. With the low average life expectancy of comets in Silbern, proper names are not wasted on comets.

This page has been seen 237 times.