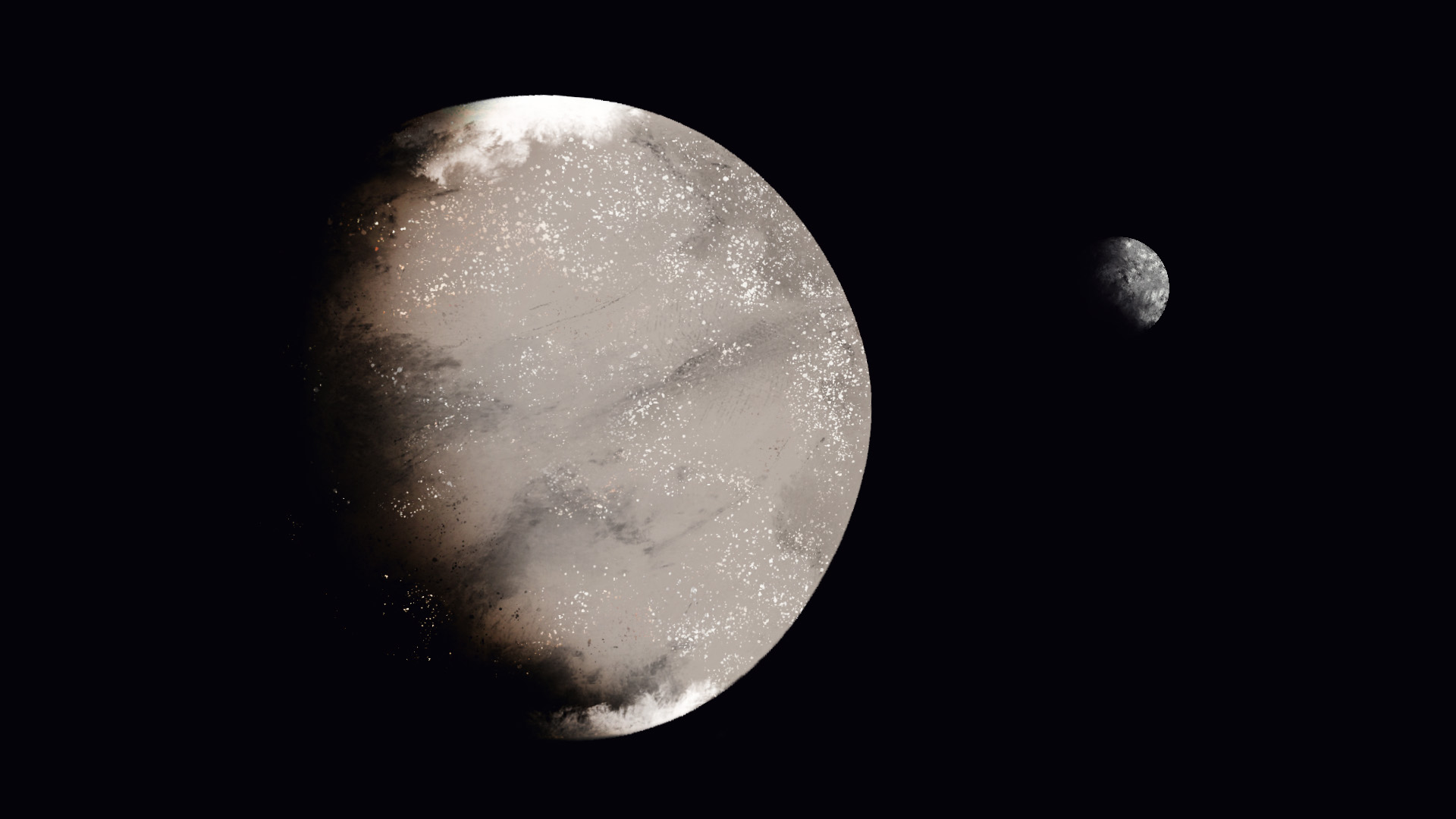 Soroka (Russian: Сорока - Eng: Magpie) was the first exoplanet discovered orbiting Yasny by telescope in 2061 CE, together with its moon. At first, it was considered an anomaly due to the amount of light it seemed to be emitting; without closer inspection, it was difficult to conclusively establish its nature. Thus, the planet was known as Yasny-III up until the first autonomous survey vessel entered Kitezh orbit. It then became apparent that it was a sand storm-plagued body with a thin, low-oxygen atmosphere, littered with vast mountain ranges of black slate and chrome-like surface deposits that reflected sunlight. It was then renamed from Yasny-III to Soroka, referring to its affinity for shiny objects.

The planet is in a constant dance with its moon, Molot, the mass of which has gradually tugged Soroka’s equator into a noticeable malformation. Both of these spheres have become home to various unmanned mining operations in order to supply Kitezh with metals for production, construction and luxury.


Soroka hosts a considerable human presence, despite not having a breathable atmosphere. As a high metal content world, the sandy surface is dotted with mining and logistical outposts, featuring launchpads, arcologies and elaborate residential networks.

The capital is known as the Tozan District, a large frontier town and spaceport with a tangle of pressurised interiors. Tozan is divided into 10 sectors, each of which is governed by an elected member of a centralized council of foremen - reporting directly to the Kitezhan CNS. The architecture is restricted to a modest height; unlike Kitezhan cities, the severe winds of Soroka's sandstorms actively threaten the integrity of most manmade structures above 8m (26ft) - and as a result Tozan is built into a Sprawl that borrows the Kitezhan underground infrastructure models. With a moderate population density, Tozan is able to boast a variety of operational branches such as chromatic processing, orbital logistics, geological and geographical scientific studies and heavy engineering.

Aside from the primary center of activity, Soroka is littered with 'Y/Sk' Outposts, currently 22 in total. Most of these are vertical quarries, set up to take advantage of Soroka's natural wonder. Metal rich ore protrudes from the surface of the soil in patches at various latitudes, forming distinct vertical 'spikes' which are capable of reaching up to 600m in height. These spikes are sheared and processed by the outposts, which are built along their surface. The Y/Sk Outposts are manned almost exclusively by droids, with the layout of various charging stations and storage units making it appear as though the machines are copying human settlements.

Occasionally, these outposts have resident administrators which help maintain the droids and oversee the operations. Some who don't have families to take care of in Tozan or elsewhere opt to remain there on a permanent basis. This is unlike the 'Monolith' mining zone on Soroka's satellite, Molot, where administrators can only be present on a part-time basis due to the moon's harsh surface gravity.

This page has been seen 93 times.