Page
Daqinren​
Pronounced as "da-ching-ren", the Dàqínrén (大秦人) are the core citizens of the Dàqín Dìguó (大秦帝国) , each otherwise known as the Daqinese and the Empire of Daqin accordingly. They are descended from artificially created trans-humans made for slavery, and yet, have changed themselves over time to the point of being distinctly different. Each and every genetically modified individual has been pushed up to, and beyond the pinnacle of human intelligence and physical fitness. Lithe yet powerful, the quick minded Daqinese serve the empire faithfully, efficiently performing in even the most arduous duties while living to their fullest in their shared virtual reality. Due to the various refinements that the Daqinese have undergone over the years, the core citizens of Daqin Diguo are capable of having their genetic structures rewritten, modified and edited as needed for their chosen occupation, splicing in traits otherwise seen in various animals to increase efficiency.

In their society, they take on many different forms, each suited to their tasks. However, it should be noted that being Daqinese in body does not mean being culturally Daqinese however. As a result, those with the money or the connections can easily purchase their gene mods of choice.

Assuming the price is right. 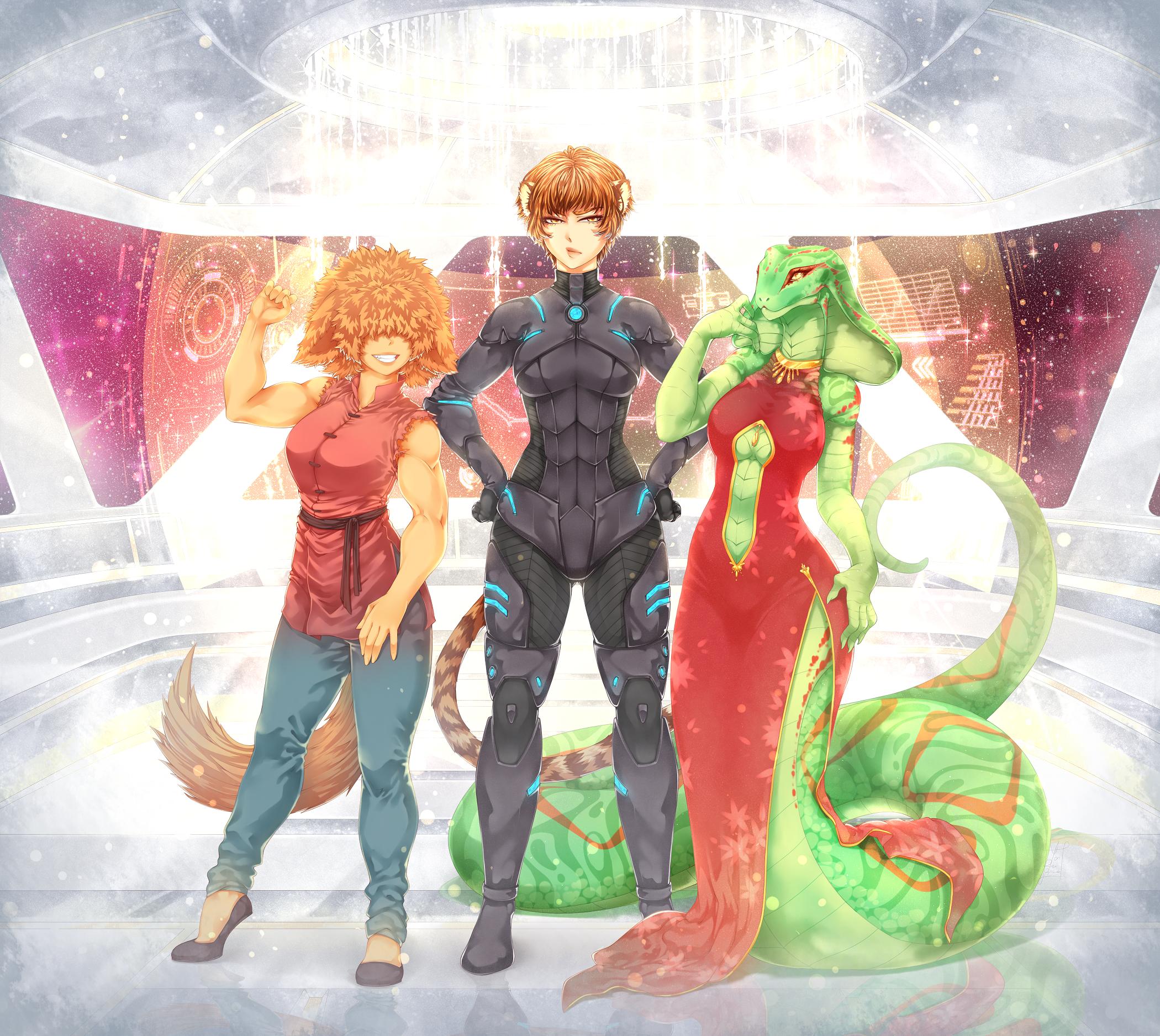 In general, it is believed by humanity that the common Daqinese citizen has the basic appearance of an attractive human of Asian decent, and of modest height. This is however, only the basis of their appearance and has fallen out of favor over the years. Depending on whether or not they were born naturally or were produced for a job, their heights, sizes and ethnicities may vary, with individuals potentially having genetic material from other species spliced in to improve performance in various areas. Those made as front-line soldiers for an example, have various traits associated with highly combative and dangerous animals such as Tigers, while high ranking governmental officials appear to be the descended from those that denote wisdom and intelligence such as Dragons, both complete with tails used to house additional sensory organs. As each occupation has different requirements, their physical builds and appearance may be changed as needed for their roles.

Though those inspired by the Chinese Zodiac are the most revered, the forms they take are not limited to just that, and can vary greatly. Despite this and the specialized training they can receive for their mandated job, they are capable of assuming any other should the need arise. Humanity believes that each form is tailored to its place in the "Four Occupations" caste system and the specific tasks or roles they are expected to perform in, however, this is a misconception born from an out-of-date theory that stemmed from the earliest days following their exodus. As a result, their appearances can vary greatly from one to the next, even within the same occupation depending on their focus and approach.

Daqinren can take on many different forms, but only 12 are officially sanctioned by The Empire:


Though human in origin, the Daqinese are in every way superior, having been augmented beyond human limits. The average citizen has physical capabilities comparable to a human Olympian athlete on an unrestricted regimen of performance enhancing drugs, though this level of performance and capability may not be initially apparent to the naked eye. This increased performance comes at a cost however, with civilians weighing 10% more on average, and military forms coming in at 20% or more due to their increased density. More specialized members go above and beyond this however, with added anatomy and physiology coming from other genetic sources, natural or artificial.


Daqinese citizens posses a drastically improved nervous system, and it is likely the most important improvement over baseline humans that they possess. Their brains alone are capable of processing more information, allowing for easy, direct links to machines without overwhelming the individual. Perhaps most importantly, their mental capacity allows for seamless integration of augmented reality and the use of digital mind-spaces. While their bodies labor, the Daqinren themselves can participate in other activities through their digital networks. In general, the Daqinese are also capable of higher thought and reaction speeds, and like with their memories, this can be obtained consistently and without strain with only some practice, a minor limitation meant to be overcome in order to prevent insanity among younger, inexperienced individuals. Finally, the Daqinese possess an improved pain threshold - though surprise pain will initially cause a typical reaction, their ability to tolerate pain that is expected or felt over long periods of time is much higher.

As an extension of their nervous system, the Daqinren also feature interface organs located at key points on their bodies. This includes anywhere from four to ten coin sized spots on their scalp that can be electronically synchronized within close proximity or by contact, as well as their tails. Though longer tails can be interacted with electronically along their entire lengths, their very base is typically the standard sampling area to allow for ease of equipment standardization.


The Daqinese are capable of wireless communication using a small, specialized region of their brain created for and dedicated to the task. Though limited in range and bandwidth by default, this ability is a key stepping stone and entry point into Daqinese culture proper. With the appropriate range and bandwidth boosters integrated into their clothing, armor or personal accessories such as earrings and necklaces, individuals have access to ultra-high speed, high bandwidth communication. Lacking that however, direct contact can also suffice, forming the necessary connection for such an exchange.


In order to improve strength, the Daqinese feature denser muscles that do not atrophy from disuse and remain well toned regardless of physical activity levels. In exchange however, their bodies are neutral buoyant, and only float to the surface slowly due to the air that is inside their lungs. Other improvements include improved oxygen storage and efficiency of use, allowing the Daqinese to sprint for far longer periods of time in comparison to the average human. Their muscles also have a faster contraction time and precision, better allowing their bodies to keep up with their improved reaction times.


Though the average Daqinese citizen still only sees within the visible light spectrum, their visual acuity does not decay with age or living in confined spaces. Instead, their visual acuity is generally 20/10; in order for both a Daqinese and a baseline human to see something with the same degree of detail, the Daqinese citizen may stand 20 feet away, while the human must come to within 10 feet. In addition to these differences, their peripheral vision has improved clarity.


The circulatory system has also seen a number of improvements in addition to being in peak physical condition throughout their lifespan. Besides preventing aneurysms and the like through having more durable, elastic arteries, veins and capillaries, the Daqinese are also more resistant to both positive and negative g-forces, especially due to the addition of specialized valves. Located in key places, these help to prevent the loss of or excessive blood pressure changes during high-g maneuvers or even acceleration during freight transit.


Unlike many other species, the Daqinese remain in their prime throughout the entirety of their lives once they reach adulthood at the age of 9, roughly half of the baseline human's development time. Once in their mid to late teens, they appear to be in their mid-to-late 20s, where the aging process stops save for minor cosmetic markers such as greying or silver-white hair. Though not immortal, this is perhaps the very most important improvement the Daqinese have over baseline humans, as they can remain productive throughout their roughly 150 year life-span rather than becoming a drain on resources as they grow old. When death nears however, the aging process is quick and sudden, where the individual will physically deteriorate over the course of a month before finally dying.

Reproduction occurs normally, much like the humans which they are based off. However, the genetic differences between humans and Daqinese have become significant enough that creating offspring naturally is very difficult, with only one in ten attempts being successful. Modern medicine can circumvent this however, but can be costly due to the likely involvement of the Empire of Daqin.


The Daqinese possess the ability to regrow entire limbs and recover from neurological damage that the average human would not. Given enough time, any injury will heal, with cosmetic scarring being the only indicator of any previous injury. Additionally, blood loss is slower due to a more advanced and selective coagulation process. Though it prevents and slows bleed-out when injured, the process does not increase the risk of thrombosis, and can also deal with fatty embolisms in a quick, efficient manner to prevent neurological damage to the brain. In general, the Daqinese remain susceptible to diseases, but with the symptoms far better managed as to almost never be debilitating or lethal - in time, the vast majority of disease will resolve themselves.