Project Jupiter: Fleshing out the Jovian System in Preparation for Plots

Wiki Moderator
The Jovian System is absolutely fascinating and a setting unto itself. It'd be criminal if we didn't utilize it for story telling. This thread is to get us started on world building for the gas giant system.

A map of the system should get us started on realizing the political and socioeconomic situations in the system. This is the best I could find so far: 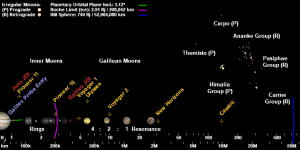 Wiki Moderator
Ok, I've been thinking about what you would need to colonize Jupiter in terms of 'what kind of space colonies might be out there?'

* A Medical Hub for production of anti-radiation drugs
* Entertaining space-Vegas
* Large radiation-shield craft? Perhaps a powered artificial magnetosphere to help reduce radiation on the major colonial settlements?
* Space-colony production (I'm thinking this might be done on the surface of Jupiter's moons rather than out in space?)
* Some ultra-high orbit fusion generator testing area (To keep radiation and possible debris away from the other stations?)
* ISOC's Headquarters (I think I mentioned its out there somewhere.)
* Large scale mirrors for power generation / plant growth?
* Fusion Fuel Storage Tanks
* Fusion fuel skimming off jupiter
* An embassy-row-spacestation to help manage all the activities in Jovian space. Or perhaps just a governmental facility?
* Shipyards for building ships

Wiki Moderator
* A Medical Hub for production of anti-radiation drugs These should be manufactured from one of the major cities.

* Entertaining space-Vegas I'd put this in high Jovian orbit for the wealthy businessmen passing by the system. Easier to access by ex-Jovians. Give it a powerful magnetosphere generator and some proper spin gravity.

* Large radiation-shield craft? Perhaps a powered artificial magnetosphere to help reduce radiation on the major colonial settlements? Europa already has a subterranean ocean that can be used for shielding. Ganymede has its own smaller magnetosphere that can be enhanced. Io is too impractical for any major colonization effort. Callisto is the one that would benefit the most out of such infrastructure.

* Space-colony production (I'm thinking this might be done on the surface of Jupiter's moons rather than out in space?) Depends. Is this a space-colony or a moon colony? If it's a space colony it's going to be easier to just repurpose one of Jupiter's many small moons and carve them out and spin them up, then move them into the proper orbits.

* ISOC's Headquarters (I think I mentioned its out there somewhere.) No comment.

* Large scale mirrors for power generation / plant growth? This always struck me as odd coming from the Expanse. Fusion generated indoor lighting is going to be more efficient than trying to get sunlight so far out there.

* Fusion Fuel Storage Tanks No comment. Any major settlement should have these.

* Fusion fuel skimming off Jupiter Current tech in the setting doesn't make this practical. It'll be a work in progress to make combatting Jupiter's gravity efficient, but otherwise fusion fuels are better off mined from Jupiter's many orbiting bodies or imported.

* An embassy-row-spacestation to help manage all the activities in Jovian space. Or perhaps just a governmental facility? I expect embassies be placed in major colonial centers and fleet commands around the Galilean moons, some monitoring stations in higher orbit as well.

* Shipyards for building ships Put these in high Jovian orbit for easy access by ships, or in orbit or around the Galilean moons for easy material access.

A sorta step-down port where mega-freighters from Earth and other planets dock to offload their cargo onto smaller transports that take it to the various destinations inside the Jovian system.


Also what about things like Music / Education / Telecom / Finance?

Those last two might be very interconnected, since faster communication is vital for traders.
Last edited: Sep 17, 2021

Wiki Moderator
https://www.centauri-dreams.org/2016/08/03/antimatter-production-harvesting-in-space/ Maybe some of the research going on around Jupiter is catching the antimatter in it's magentosphere? Apparently Saturn is better, but I'm assuming more people, thus researchers, are around Jupiter.

Edit: On the mirror issue, I think the idea is that mirrors are way cheaper than fusion generators, so you might as well use the silica you dig up to give you more solar collecting?