Wiki Moderator
To prelude this conversation I'd like to first direct your attention to the shape of a modern, seafaring warship: 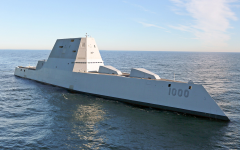 ​
This is the USS Zumwalt Class Destroyer. It has certainly met its fair share of controversy, but as a whole, it has the quintessential configuration of a modern surface combat warship. 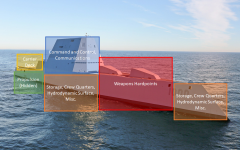 Thus, before we discuss the general layout of a space-faring warship, we need to characterize the environment it operates in, which will determine constraints, then strategy, then function, which therefore leads to form. First, as I've already discussed in this forum post, due to the high accelerations a spacecraft would undergo along its thrust vector, it's better to consider these warships as towers that have to withstand their own weight. Yet that along doesn't determine the shape of a warship, where its components are placed. Thus, something else must be considered: that space is big and empty.

Because space is so big and so empty, stealth is almost impossible and time between first observation and actual contact is non-negligible. Thus, almost always, you'll learn what your opponent's capabilities are and where they're heading. If your warship is on intercept course, you have two choices: either to slow down to match their flight path, to spend as much time as possible to put fire onto the enemy vessel; or to reverse course, increase distance, to keep them out of weapons range or flee entirely. Regardless, due to way physics works the end result is the same. Your warship will have its engine pointed at the enemy, either to decelerate towards them or to accelerate away from them.

Wiki Moderator
Now that the default combat orientation is understood, we can now construct the rest of the warship. Spacedock did an excellent video addressing this subject here. I'll also bring up a good warship design that unfortunately don't work in this combat environment we're assuming. 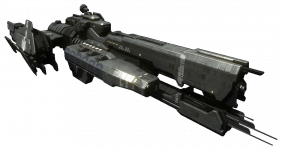 ​
Meet the Paris Class Frigate from the Halo series, what many, including myself, would consider one of the best spaceship designs in all of science fiction. Unfortunately, with the combat rules we're assuming, the main armament of the ship, the Magnetically Accelerated Cannon (MAC), will be pointed away from the enemy while it's decelerating towards/accelerating away, unless the ship is constantly turning around to fire shots in between periods of engine burns, which could be an option for smaller, more agile warships.

Therefore, it would be wise to mount primary weaponry on the sides of the warship so they can aim in the direction of the drive plume and fire:

​
Besides propulsion and the weapons payload, the next important components of the ship are command, control, and communication. Communication has the same requirements as the weaponry here. It'll need line of sight in the direction of the drive plume and opposite, so just sticking antennas out of the nose of the ship won't do. There will have to be communication arrays and sensors on the sides of the ship, preferably on trusses sticking out, to maximize the total field of view.

Command and control is more flexible. Its primary requirement is that it is put as further away from harm's way as possible. Modern sea-faring vessels require a bridge to be on an exposed tower structure so officers have good visible line of sight, but space-faring vessels don't have such a requirement, so they can be buried as deep as possible into the warship's structures, which seems counter-intuitive that I'm putting it at the nose of the ship.

​
However, assuming that the combat orientation shown in the figure is the most dominant, this configuration maximizes the material between the engine and command & control when a railgun round punches through the ship.

So where does the rest of the ship go? Crew quarters, storage, etc? As this article points out, their secondary nature means that they'll have to be crammed in wherever possible. They certainly should not be the dominant, visible feature of a warship. If they are, then it's not a warship. It's a freighter or cruise liner with weapons tacked on.

Wiki Moderator
So now you're probably wondering, "Will every ship in the setting have to follow this layout?" The answer is a definitive no.

I'll give an example of where I break away from my own recommendations. Consider the Huo'Xuan'Feng (Fire Spin) Class Artillery Corvette:

​
This was certainly inspired in part by the Paris Class Frigate, a large railgun dominating the aesthetics. Here, the implementation of retro rockets allow for a different ship layout that accommodates a weapon that takes up nearly half of the ship.

Here's the kicker. The point of this article isn't to state what ships should look like in the setting. It's not even a recommendation of what ships should look like. The point is to provide one possible, logical train of thought for ship design that can hold up to scrutiny. I am of the belief that a ship design where logical functionality dictates its form will have a heavier aesthetic impact than a ship design with arbitrary geometry prioritized instead.
You must log in or register to reply here.
Share:
Facebook Twitter Reddit Pinterest Tumblr WhatsApp Email Share Link
Top